Why the Elderly Love Cell Phones for Seniors 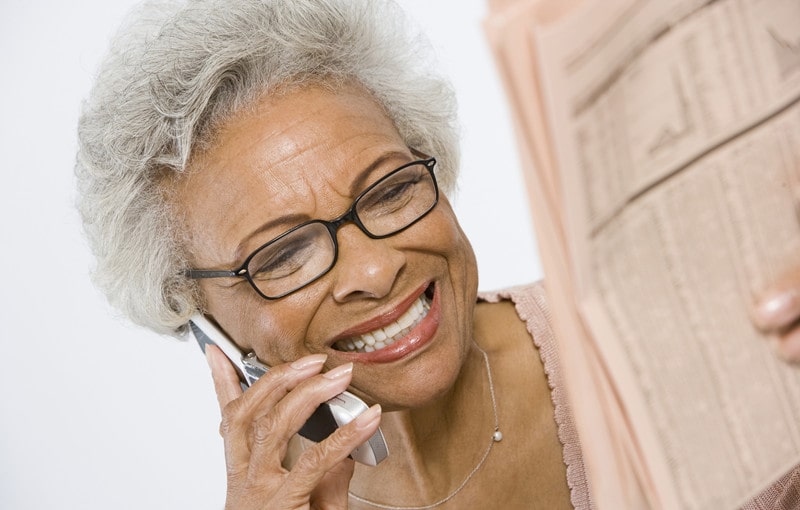 For the younger generations, it seems almost criminal to use a cell phone that doesn’t have a touch screen, a variety of apps, and the ability to take photos as if we’re using a proper DSLR. But the elderly don’t really care much about that kind of stuff, which makes them oh so easy to please. All they want is to make a few calls from time to time, send texts when needed, and potentially take a few pics of the grandkids when they visit. There’s no need for the latest smartphone in that case — not when there are incredible cell phones for seniors to choose from.

These phones should cater to their basic needs and make the elderly feel as if they are a part of the communication-obsessed world but to a much lesser degree. For the most part, we believe they are delighted with them. But that won’t do — we had to ask the seniors themselves!

Why the Elderly Love Cell Phones for Seniors

They’re So Easy to Use…

Naturally, one of the most significant advantages of cell phones for seniors seems to be the ease of use.

The elderly agree that this makes the whole process of learning how to use the phone effortless; for some, it makes continuing to use it in everyday life all the more pleasing. They don’t have to keep calling for help to understand certain features, as the designs are rather intuitive. At the same time, there aren’t many functions to begin with, which means fewer headaches overall.

Now, you may wonder why the elderly have such a huge problem with modern phones and try to avoid them. Most of the time, it just comes down to technology.

Unlike the younger generations, those who are 70+ years old didn’t grow up having gadgets within reach at all times. Thus, anything that goes beyond what the early computers allowed for may seem too complex to them.

In fact, research has even shown that they suffer from a lack of confidence when it comes to digital technology. They aren’t necessarily scared of it, but they’re not comfortable with it either.

…But Not So Easy to Break

Another thing that the elderly love about cell phones for seniors is that they don’t break so often. We’ve all seen how fast an iPhone can lose all its appeal as it gets smashed here and there. And it’s so easy to break these, even if we’re using protective films and cases!

But with most cell phones for seniors, the elderly don’t have to worry so much about drops and potential breakage. These phones were made with them in mind; naturally, the materials used can withstand more than a few drops.

The design itself may also prevent frequent breakage. Candy bar and flip phones are especially popular. We all remember those early Nokia block phones and how brick-like they were. Flip phones might be even more durable, as the display has additional protection when the phone is closed!

Of course, seniors aren’t looking to spend a lot of money on their cell phones and plans, so these elderly-friendly phones are bound to dazzle them. They’re usually inexpensive as they don’t have to be the latest example of how technology is getting better each year. Plus, they feature simplified functions and hardly ever sport other bells and whistles. That makes a reasonable price almost but a guarantee.

…and Come With Useful Senior-Specific Features

Cell phones for seniors usually don’t come with a bunch of apps and widgets to organize one’s 21st-century life in the fast lane. What they do have, however, are senior-specific functions that could make all the difference in case of an emergency. Otherwise, they could probably make a senior’s life so much easier. This is especially true if their hearing and/or eyesight have been taking the turn for the worst lately.

The SOS button, for example, is a sought-after feature, mostly among the caregivers and family members of the seniors in question. Since it allows the elderly to get prompt assistance in case of emergency, it’s an invaluable addition to phones that most seniors are probably going to carry with them at all times. Thus, it may potentially prevent serious injuries and tragedies. At the very least, it could help seniors in a sticky situation, like when they’re locked out of their homes!

They Cancel Out FOMO…

The Fear Of Missing Out can get the best out of any of us, but seniors have it particularly hard. Just imagine having the whole world go crazy about technological advances that were just ideas back when you were young. And now, you’re not even able to be a part of that world — not really — as you cannot catch up with the younger generation.

But FOMO doesn’t have to be a thing among seniors if they’re willing to try out new things. Cell phones for seniors, although simplified, are still incredible examples of what the human brain can think of and how much technology can help us.

Those who fall under the “younger senior” category (usually below 65 years old) may even get a chance to sport a smartphone. That in and of itself should cancel out any FOMO they may have been feeling. Some of them even say that it makes them feel younger (or at least cooler!).

…and Thus Offer a Better Lifestyle

Finally, the elderly emphasize that these cell phones have helped them make some healthy and positive changes in their lives. For example, those who wanted a smartphone now love having Google at their fingertips and learning wherever they are. Among other things, their phones have helped them keep memories alive by letting them take photos whenever they want. Some have even discovered social media!

Those who have opted for candy bar or flip phones also confirm that having a cell phone that doesn’t require a user manual every time they want to use it sure helps feel less lonely on a daily basis. If they miss their kids or grandkids, they can easily shoot them a text or, if they aren’t so keen on typing, call them in just a few steps. Since there aren’t so many functions to learn by heart, they don’t feel overwhelmed and can instead use the phones comfortably whenever they want. Thus, their confidence has grown as well, making it less daunting to pick up the cell phone and use it every day.

When it comes to cell phones for seniors, the target audience — our grandparents and the elderly in general — seems to agree that they’ve made their lives a whole lot easier. What was once a gigantic hurdle is no longer an obstacle. Now, they don’t see cell phones as scary ringing beasts. Instead, they know these are useful gadgets that bring them closer to their near and dear.

And that’s actually the main reason they’re so fond of them. At a time when everything seems like it’s slipping away, these gadgets have allowed them to enhance their lifestyles and the way they communicate with the outside world. Loneliness is no longer an option when loved ones are a (super-effortless) call or text away — and that’s all thanks to cell phones for seniors.